To bury a brother 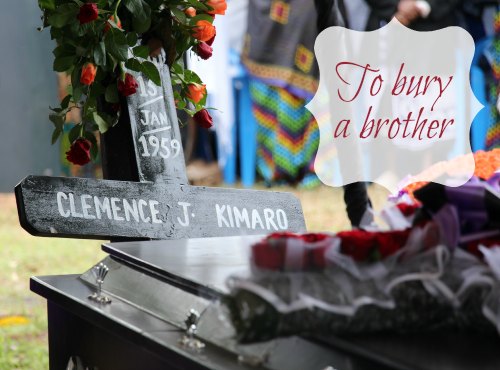 Last week was a long and difficult one. On December 1, Kakasii got a call from his brother Ndessamburo, that another brother, Clemence, had been in a car accident in Kenya while on the way to Nairobi. There were no more details than that available, so Kakasii, Ndessamburo and their half-brother Frank headed toward Nairobi to locate the accident and find out what was happening. They didn’t know yet at that time that Clemence had been killed.

At the border between Tanzania and Kenya, they were met by Clemence’s sons, Immanuel and Steven, who had been in the accident with Clemence. That’s when they got the news. They brought the boys back to Arusha and made plans to return to Kenya the following day to bring Clemence’s body to Tanzania and prepare for the funeral.

Clemence was just a few  years older than Kakasii, and leaves behind his wife (Mama Imma) and the two sons, similar in age to our Ombeni and Godson. He was a lecturer at the Dar es Salaam Institute of Technology and owned a business selling laboratory equipment and chemicals to schools for their chemistry classes. He is the second of Kakasii’s siblings to pass away; his sister Salome died many years ago due to complications in childbirth.

The funeral was at our shamba and Clemence was buried there next to Kakasii’s mother.

It’s quite common in Tanzania to hire a photographer for the funeral, just as a family would for a wedding or other milestone event. Some families even hire a videographer and have a DVD of the funeral produced. Although in the U.S. it might seem strange to take pictures of a funeral, I can see the value of doing so. My memories of my dad’s funeral are pretty faded after 15 years; having some photos to remember would actually be really nice. I was 5 months pregnant with Max and Elly when Kakasii’s mother passed away so I wasn’t able to travel to Tanzania for the funeral, but I appreciated being able to watch the DVD.

We did hire a photographer for Clemence’s funeral, and I also took some photos to share with the family: 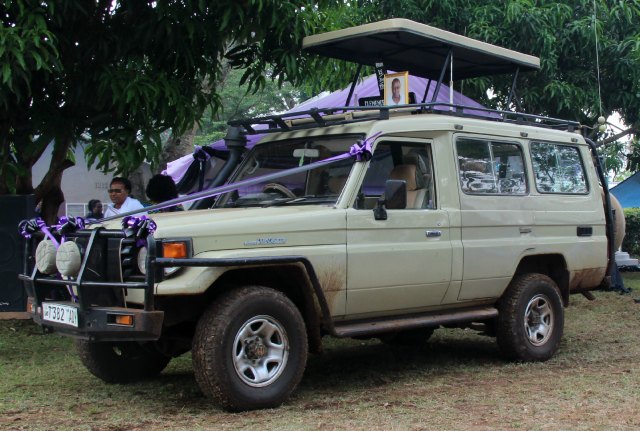 In the absence of hearses, a Land Cruiser, minibus or pick-up truck is used to transport the deceased to the burial site. 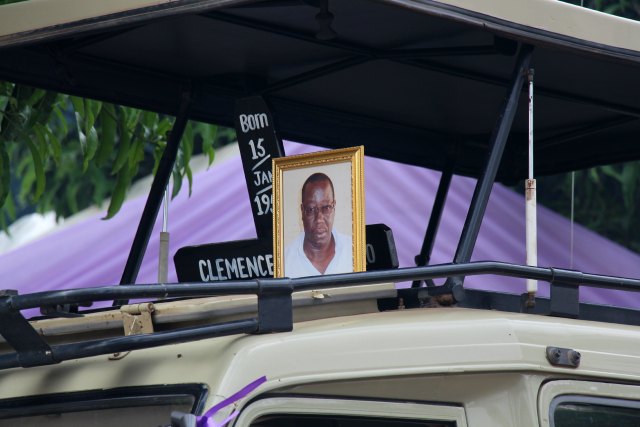 As room permits, family members will ride with the body, displaying the grave marker and a photo of the deceased. 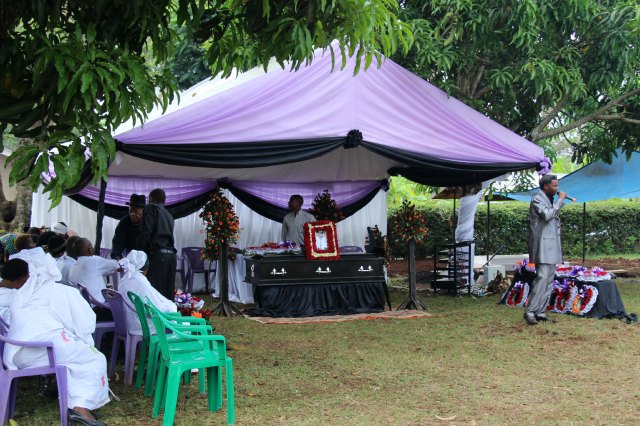 A member of the family did all of the decorations and flowers. 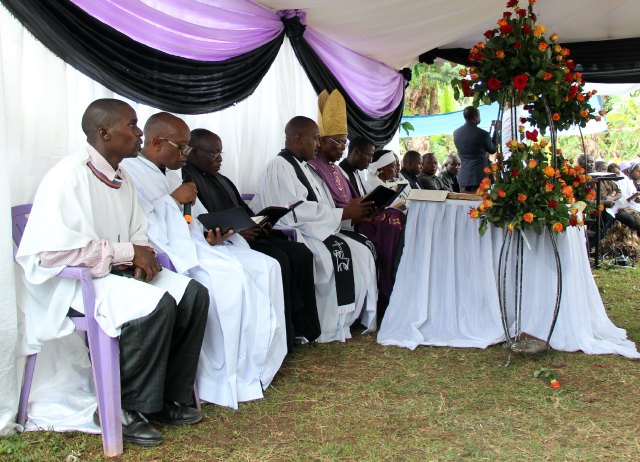 It was a beautiful service with Retired Bishop Erasto Kweka of the Evangelical Lutheran Church in Tanzania Northern Diocese and the pastors of the Uswaa Lutheran Parish presiding. 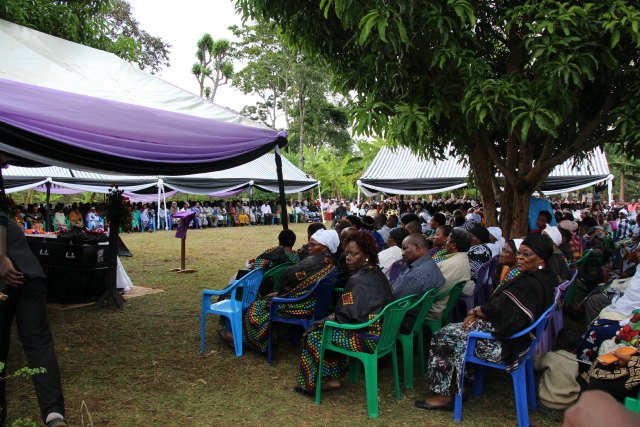 I would estimate more than 500 people attended. There were three large tents set up with chairs, several wooden benches between the tents, plus many people standing. The family sat in the shade of our big mango tree. 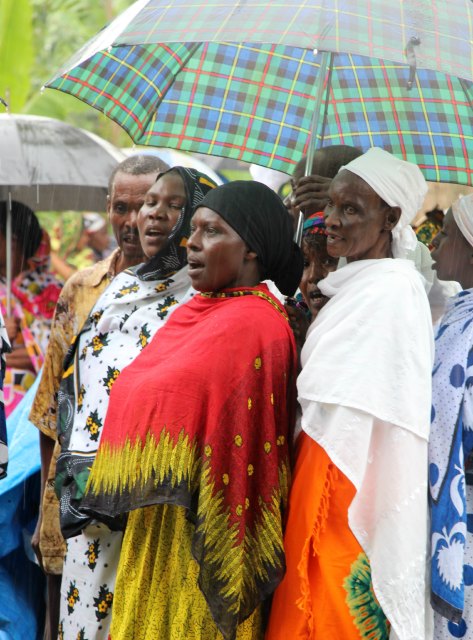 Part way through the service it started to rain pretty heavily. The choir huddled under large umbrellas as they sang. 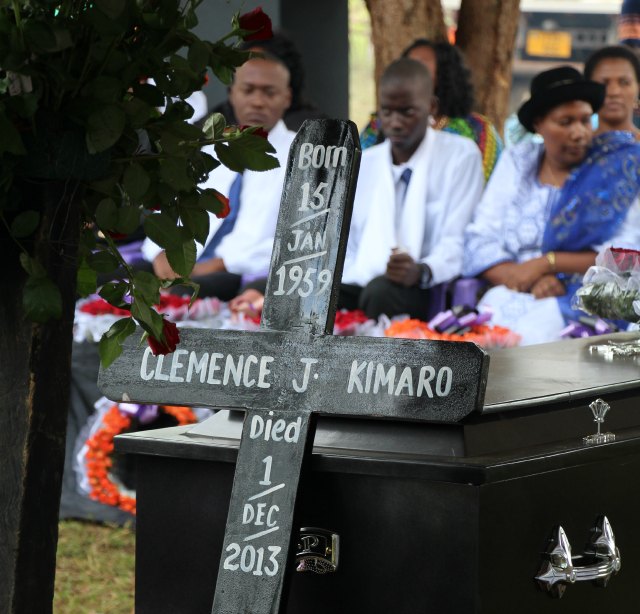 The woman in the black hat is Mama Imma, Immanuel is on the left and Steven, who suffered an arm injury in the accident, is on the right. 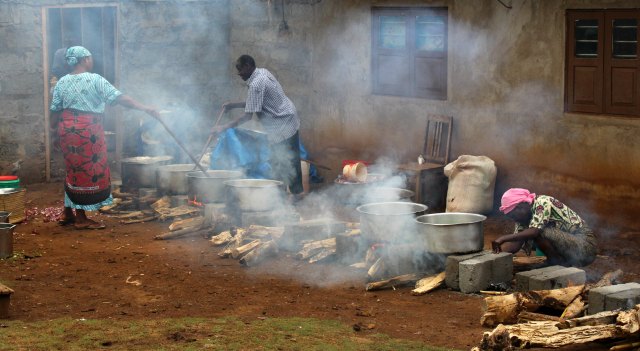 After the service the guests were served a traditional Tanzanian meal of banana stew. We slaughtered our biggest bull (the one that attacked Kakasii a while back) to provide the meat. The caterers used 14 of these huge cooking pots to make the stew. 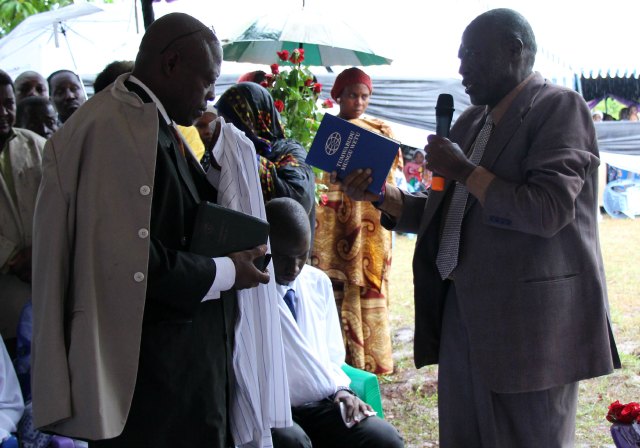 There’s a custom in Tanzania that when a man dies and still has children living at home, another man in the family is named to serve as a father figure and help with the upbringing of the children. He is given a coat or hat or other item belonging to the deceased to symbolize his new role. Here Kakasii’s oldest brother Geoffrey is presenting Clemence’s coat, shirt, bible and hymn book to Ndessamburo.

On the third day following burial the family gathered again for prayer, signaling the end of the official grieving period, according to custom. Clemence’s wife and boys will remain in Kwasadala (the village where Clemence had a home and based his business) for another few days before returning to Dar es Salaam.

This entry was posted in Little House on Kilimanjaro, Tanzanian Culture. Bookmark the permalink.