Last week we celebrated Parents’ Day at ELIMAA School. It was a great celebration of all that we’ve been able to accomplish over the last year or so, thanks in large part to the generous support we’ve received from so many of you!

As I explained in my ELIMAA update post, more and more children are in need of ELIMAA School. So we set our sights on expanding for the new year. With the remaining donations we received in 2015, we got very busy in December and were able to:

At Parents’ Day, we had an official ribbon cutting ceremony to celebrate the additions. We invited the area community leaders to help with the ceremony.

Then the original classroom, now new and improved with a bigger window:

After that, the new classroom: 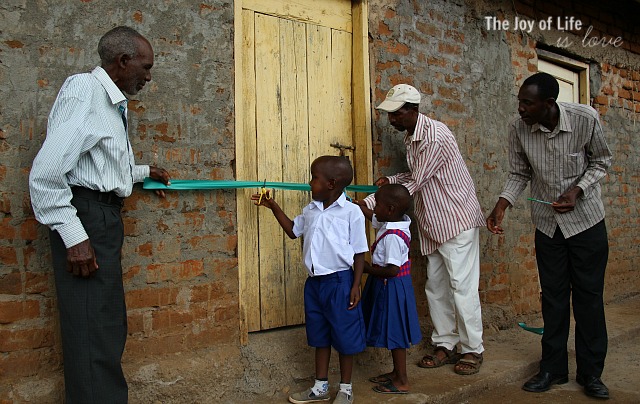 And finally the new outdoor kitchen:

(In a future post I’ll share more photos of the insides of the rooms–we were just so busy with Parents’ Day that I didn’t have a chance to get interior shots!)

But, without a doubt, the new update that brought the biggest celebration from students and parents alike was the new school uniforms!

This is something the parents have been asking for for quite a while. In Tanzania, it’s expected that if a child is in school they’ll have an official school uniform to wear. So, even though the children at ELIMAA were receiving an excellent education and excelling academically, it just didn’t quite feel legitimate to the parents.

The new uniforms were made by possible by a new friend of ELIMAA School, Rahel Mwitula Williams, who visited ELIMAA in November with the Women of the ELCA delegation that helped us with the Lutheran World Relief Quilt & Kit distribution. Rahel is a native Tanzanian but now lives in Chicago and is the founder of ILAVA, a beautiful fashion line inspired by the bright, bold fabrics so common here in Tanzania. Rahel designed the uniforms herself, and got them delivered to us just in time to distribute for Parents’ Day.

Now just as we’ve made these huge leaps for the school, we need to think about what more we can do to serve the families of Kwamorombo. Even with adding the second class and teacher, about 20 students more than we had room for reported to school on the first day of the term! We’ve had some other really generous support come in since the first of the year that I’ll be sharing about in another post, but we would also love and appreciate your support to help us take the next steps. Can you help ELIMAA School grow and serve even more in 2016?

I don’t really know how to adequately express my gratitude for the generous support and wonderful encourage we’ve received since I starting sharing about ELIMAA here on the blog and on my Facebook page. All I know to do is say THANK YOU! and promise that we’ll be careful stewards of every dollar you donate to make the greatest possible impact on the families of Kwamorombo and beyond. Stay tuned for more great news from ELIMAA!